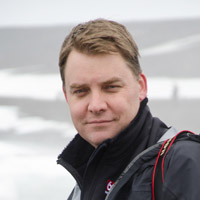 Joshua is also the founder and lead photography guide for Wild Nature Photo Travel. His experience photographing and working with penguins makes him the ideal project photographer for Penguin World.

n Australia Joshua is officially represented by Philip Kulpa and the Source Photographica Gallery. International representation includes the Wilderness Gallery at Cradle Mountain in Tasmania, the Aspen Gallery in Aspen USA and the Arctic Fox Centre in Sudavik, Iceland. His work has also been exhibited at international shows and expos across the USA, Russia and Europe including Photokina in Germany and PhotoPlus in New York as well as being published in countless magazines.

WHY PENGUIN WORLD?
Specialising in polar and sub-polar photography Joshua has worked extensively with many of the world’s Penguin species including the largest colony of Emperor Penguins in the world, found deep inside Antarctica. Joshua has witnessed and documented first hand the effects of changes in our oceans on the Penguins and how vulnerable these important marine animals are to the future of our oceans. Joshua’s passion for sharing his experiences and photographs through his expeditions held raise awareness for global warming, over fishing and the preservation of all marine life.